A North-east firm has rounded off its fundraising year with a five figure donation for its two chosen charities.

Employees from Motive Offshore, which was established in 2010 and is headquartered in Boyndie, near Banff, successfully managed to raise more than £11,000 for Cancer Research UK and local children’s charity, The ARCHIE Foundation. 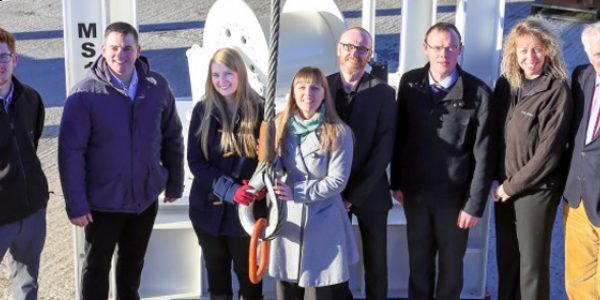 Employees at the company, who established their own charity group, Team Motive, at the start of 2014, participated in various fundraising initiatives which tested their fitness abilities, including the Knock Hill Race – a local eight and half mile hill race held as part of the Cornhill Highland Games and the gruelling challenge of Tough Mudder, a 12 mile assault course through mud, water and ice.

Team Motive also took part in two of ARCHIE’s annual events – the virtual walking challenge which saw the group collectively accumulate 500 miles on pedometers, while some members took part in the charity’s Beards For Bairns campaign. Team Motive’s ladies also successfully completed the Inverness Race for Life and to finish off the fundraising drive, the group hosted a race night for employees.

Following the employees’ efforts, Motive Offshore announced that the firm would match the funds raised by Team Motive, bringing the total fundraising amount to more than £22,000. Team Motive has also promised to continue its commitments to both charities for a second year.

Team Motive has done a fantastic job in raising an amazing amount of money for our two chosen charities. The level of commitment and teamwork from the group has been admirable and I am extremely proud of everyone’s enthusiasm in each activity we participated in. As a company, we are extremely focussed on our people, as without them we would not be the success we are. Launching our own charity group was quite ambitious, but it has definitely helped to bring our employees together, and develop staff relationships, as many of the challenges required a great deal of teamwork. It is also very important that we give back and support the local community and I am truly delighted to have achieved so much in just one year and cannot wait to see what is in store for Team Motive in 2015.

I would like to thank everyone involved with Team Motive for helping to beat cancer sooner by fundraising for Cancer Research UK. At Cancer Research UK we want to bring forward the day when all cancers are cured and due to the hard work and dedication of Team Motive, that day will come sooner.